With the Ryder Cup starting this Friday, we thought we’d give the golf purists out there an overview of Team Europe’s stars.

Francesco Molinari has the complete game. With ball striking, driving accuracy and overall consistency, Molinari is up there with the best in modern-day golf- this is reflected in his current world ranking of 5. He won the British Open in impressive fashion, playing alongside Tiger in the final round and beating challengers McIlroy and Spieth to the Claret Jug. His experience and an impressive record at Le Golf National could see him feature in all five matches.

However, his Ryder Cup record isn’t great. He has yet to win a match and, considering he has played on two winning sides, this is an alarming stat. But Molinari is a different beast nowadays and could be a key figure in the European side. The Italian last competed in the event in 2012, where he played the anchor role on day 3 (singles) halving with Woods to complete the “Miracle at Medinah”. His steady nerve and consistent play could make him an essential figure in the foursomes format.

A major champion, an Olympic Gold Medallist, and now a former World Number One. Rose is in the form of his life. With the help of his coach, Sean Foley, the Brit has developed a swing that has seen him compete worldwide and ultimately becoming the best player in the world. Justin will head to France £10 million richer after winning the FedEx Cup last week.

His Ryder Cup record is superb with nine match wins in 14 matches. Rose has become “ever-present” in recent European sides and will make his 5th appearance out of the last six this week. He played a big part in the “Miracle at Medinah” turning his match around in the final holes against Phil Mickelson. It is likely he will link up with close friend Stenson again as he looks to test himself against the might of the Americans.

Tyrrell is an exhilarating prospect. Known for his hot temper on the course; Bjorn will be thankful that his first Ryder Cup experience is on home soil where the fans will help – not hinder -the young star’s game.

In theory, the Ryder Cup will be the perfect stage for Hatton. It is safe to say that he doesn’t lack confidence and, with the millions of viewers, it will offer him a chance to showcase his talents on the global stage.

The rise of Fleetwood to the pinnacle of the game has been a fairytale story. After nearly losing his Tour card, his hard work and talent have seen him compete at the highest level and achieve automatic qualification for Team Europe. Fleetwood is a past winner at the French Open at Le Golf National, this week’s competition venue.

Even though he is yet to capture that elusive first PGA Tour victory, he will head into his first Ryder Cup knowing that his game has never been in better shape. He has proved to his doubters, and to himself, that his game holds up under the highest pressure. He equalled the lowest round in US Open history in the final round where he sought his maiden major, finishing one shot off the eventual champion Koepka. He’ll look to bring this type of form to France this week. 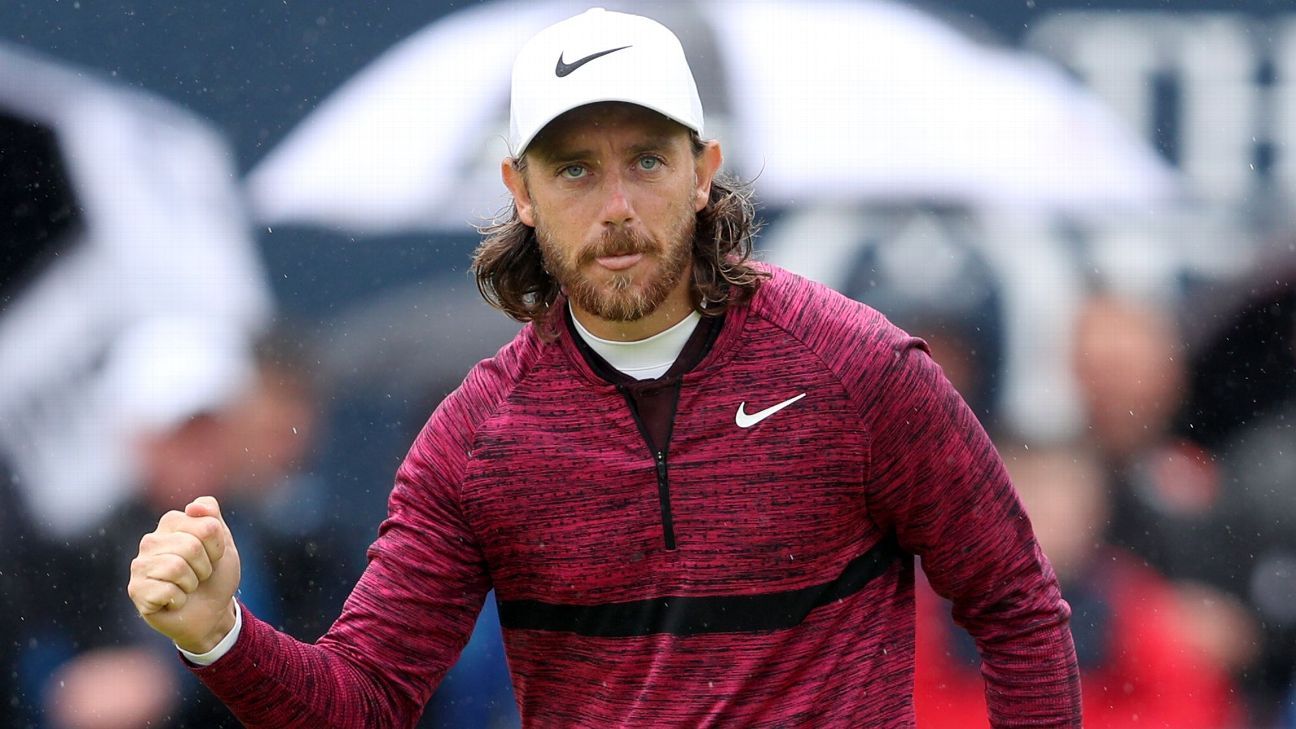 At the age of 23, Rahm has had a very impressive start to his career. He has shown an appetite for the big occasion, relishing the pressured environments. In April when he won his home event, the Spanish Open.

Competing in his first Ryder Cup, Rahm doesn’t come into the event with many forms since that win in April. However, he still qualified for the Tour Championship which confirms his consistency over the season. Rahm will hope to emulate his heroes Seve Ballesteros and Jose Maria Olazabal this week, channelling their passion and creativity into his own game on the course.

Rory has had a frustrating year by narrowly missing out on a couple of majors. Statistically, his all-around game is the best in the world. However, he has found it difficult to fit all the pieces of the puzzle together for four rounds, with putting being the part of his game that consistently lets him down.

Rory hasn’t missed a Ryder Cup since his first in 2010, playing all 5 matches on every occasion. Consequently, he finds himself as one of the most experienced players in Team Europe. He has a winning mentality, having won three out of the four Cup’s he has played in and will look to him to lead by example this week.

His record in the Ryder Cup is good, but there is a question over who the Northern Irishman will partner this week with previous partner Pieters failing to make the team. His singles record was impressive, dismantling the in-form Fowler at Gleneagles in 2014. However, he then ran into Captain America, Reed at Hazeltine, where they played an iconic match with Rory losing one down. The golfing community can only hope he gets a chance for redemption in Sunday’s singles.

Noren has played the majority of his best golf on the European Tour, most notably his BMW Championship victory at Wentworth in 2017. More recently, he won the French Open at Le Golf National, this week’s Ryder Cup venue. He has brought this kind of form stateside, establishing himself inside the world’s top 20.

Aged 36, this is Noren’s first Ryder Cup, and he has worked very hard to make the team. Having fond memories of the course, reliable mechanics and a good temperament, I see Alex having a successful Ryder Cup debut.

The Dane has one of the coolest nicknames in the sport. Thorbjorn means “Thunder Bear”, and this title has stuck with Olesen. The 28-year-old, like so many of Team Europe, is a rookie and will make his debut this week.

He seized the final automatic qualifying spot due to his form on the European Tour; culminating in an impressive win at the Italian Open where he held a clutch putt at the last. He will be an unknown quantity for many Americans. However, it would be foolish to take him lightly; he has no glaring weaknesses to his game and a powerful, elegant swing that gets consistent results.

Can Rory & Co. Do it on home soil? Throw your punt on with Toals.com

In true Poulter fashion, his 2018 comeback season was symbolic of the gritty, determined man himself. Although he nearly lost his playing privileges in 2016, it spurred him onto better things. Poults completed the most significant comeback victory in PGA Tour history; after round one, he sat 123rd on the leaderboard. On the 72nd hole, he beat his chest where his heart is, sinking a 20-footer to force a playoff. He won the ensuing playoff to win the Houston Open.

With his role kickstarting the “Miracle at Medinah”, birdieing the last five holes on Saturday and his previous Ryder Cup exploits, Poulter made it nearly impossible for Captain Bjorn to leave him out. Poutler’s presence alone could be enough to spur on the Rookies this week.

His passion and enthusiasm for the event are unmatched; his game peaks for this event and is illustrated in his superb record of being unbeaten in singles.

Few can forget that famous showdown between Henrick and Phil at the British Open. It was a Ryder Cup-type tussle between two gladiators who traded birdies the whole day. Stenson fulfilled his true potential that day by winning his first major. However, in recent times, Henrick has failed to recapture the form that saw him lift that maiden major. Perhaps he lost motivation and focus; a home Ryder Cup will surely see the classy Swede back to his best.

He, like Poults, Rose and McIlroy, is one of the leaders of the team. His first Ryder Cup was in 2006, and this will be his 5th. He relied on Bjorn for a pick. He was an obvious choice given his ability. Also, Bjorn is likely to renew Henrick’s partnership with World Number One Justin Rose, where they were so impressive in 2014.

Casey is recognised globally as a fierce competitor and a world-class golfer. He is consistently at the top of PGA tour leaderboards. He has obvious match play pedigree winning a World Matchplay event in 2006.

Paul has played in 3 Ryders Cup between 2004 and 2008. To be considered for the team, players must be members of the European Tour. Casey chose not to redeem his membership of the European Tour; subsequently, this ruled him out of future Ryder Cup’s.

We can’t underestimate the role Captain Bjorn has played in Casey’s return to the European side. He persuaded him to take his European tour card back. At 41, veteran Casey will hope to recreate some of the magic of his youth when he tees it up this week.

To suggest Garcia lacks form since his Master’s win in 2017 is an understatement. The inclusion of Sergio has divided opinion amongst golf fans. However, like many Spaniards before him, the Ryder Cup has been a stage for Sergio to showcase his talents.

Garcia has been involved in every Ryder Cup bar one since 1999. In 1999, the fresh-faced Spaniard was the youngest player to compete, a record that still stands. It’s hard to imagine a modern Ryder Cup without the European stalwart.

His longevity and importance to the European team are evident, winning over half his matches in his 8 Ryder Cups. However, there is no doubt that he will be under severe pressure this week not to let Bjorn down for trusting him.

Will it be Victory for the Europeans? Put your money on it with Toals.com